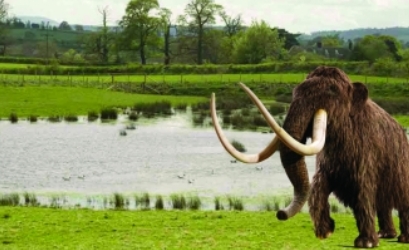 We’re lucky enough in our parish to have a number of Ice Age ponds – ponds that were created when wooley mammoths roamed the countryside 22,000 years ago. We’re lucky because they contain rare and nationally scarce wildlife such as certain species of diving beetles, insects and plants not found elsewhere in Herefordshire.

It’s amazing to think that some of the species that colonise these ponds today have been there for tens of thousands of years.

Kenchester has a cluster of 5 of these ponds, known as kettle hole ponds; some dry out in the summer while others are there all year round. They are home to many different species including small red eyed damselfly and rare water diving beetles. They also support the county’s largest great crested newt colony. 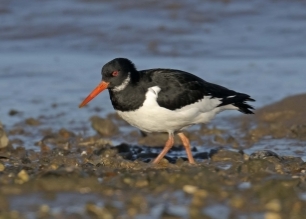 Mervyn Davies in Bishopstone has been surveying these ponds for the British Trust for Ornithology these past 5 years and in an average year sees over 80 different species of birds. These include rare waders such as Oystercatchers, a black and white bird with orange/red bill and reddish pink legs, and Curlews with their distinctive call.

Kettle hole ponds were created during the last Ice Age when large chunks of ice were left behind as the ice sheet retreated to central Wales (see map showing the reach of the ice sheet close to the current A49). As these chunks of ice melted, saucer-shaped depressions in the glacial material remained. It’s the warm, sunny, shallow areas that have gradually been colonised by plants and other life forms. 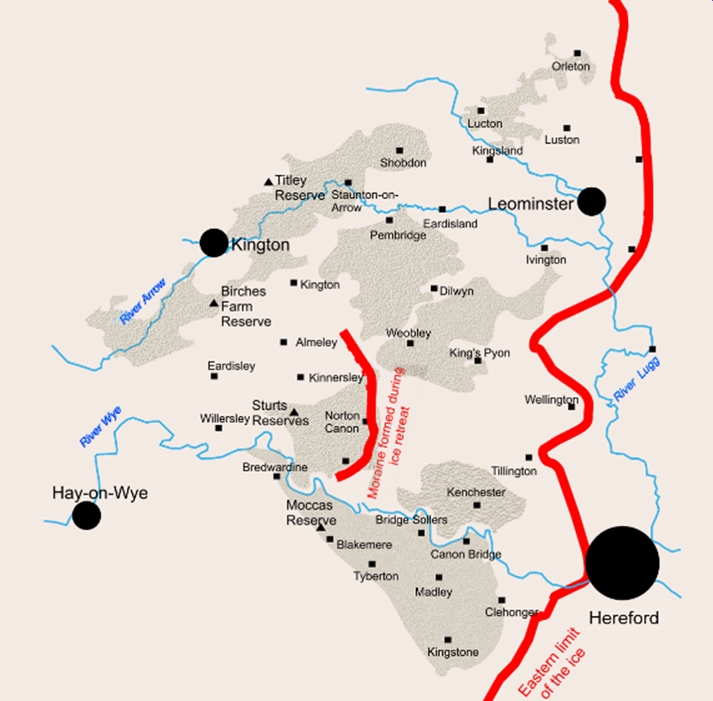 Nearby, other ice age ponds of note include Lawn Pool at Moccas Park (home of the UK’s largest blood-sucking leech), The Sturts at Kinnersley and Mere Pool near Blakemere. Last year, researchers surveyed Lawn Pool and counted 53 species of aquatic invertebrates in a single session (an average pond would yield about 20). This survey identified an incredible 32 species of water beetle. 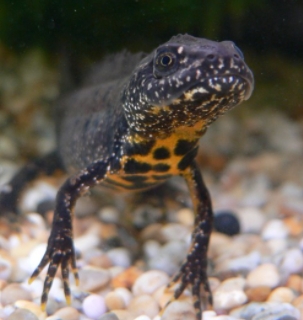 Ecologist Will Watson surveyed some of Herefordshire’s kettle hole ponds in 2003 and realised something extraordinary: out of 260 ponds, nearly half were home to the rare great crested newt. This is probably the highest occurrence rate for the species anywhere in Britain.

Across the UK, just 2% of ponds are of natural origin, rather than manmade. Here in north-west Herefordshire, 25% of ponds are natural. It’s estimated there are 1500 of these Ice Age ponds in our county, many have disappeared as they become silted up or filled in to expand agricultural land.

With money from the National Lottery Heritage Fund, the Ice Age Pond project will survey as many Ice Age ponds as it can with the help of volunteers and hopes to raise awareness of the importance and biodiversity of these ponds to more people in Herefordshire.

On a few selected ponds the project will cut away the vegetation cover that shades them to allow wildlife to regenerate.

“If you leave a pond it will naturally, in most cases, silt up and turn into a bog or a woodland,” says Dave Hutton, ice age ponds project officer at Herefordshire Wildlife Trust. “Without those natural processes, like aurochs and large mammals traipsing around and keeping them open, ponds and their wildlife tend to disappear. We’re acting like beavers and other large herbivores and keeping them open.”

The Spring training sessions for Conserving Herefordshire’s Ice Age Pond Project will take place live on Zoom starting on Friday March 5th. The sessions will enable volunteers to carry out practical pond surveys during Spring and Summer.  If you are interested email Dave Hutton – d.hutton@herefordshirewt.co.uk

For more information about the project, go to https://www.herefordshirewt.org/iceageponds 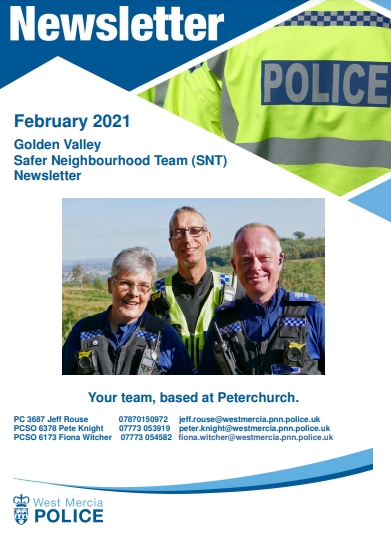 Here is the February newsletter from the Golden Valley Safer Neighbourhood Team providing advice on how to detect Coronovirus Scams and where to report them.

These include a fake NHS text telling people they’re eligible to apply for the COVID-19 vaccine. The web link in the text message takes you through to an extremely convincing fake NHS website that asks for your personal details, asking for bank/card details in order to ‘check identity’.

The NHS will contact you when it is your turn to receive the vaccine, likely by letter from your GP or from the NHS itself.  You will NOT be asked for bank details.

Some people are receiving fake text messages claiming they’ve been in contact with someone who’s
tested positive for COVID-19. The newsletter shows how you tell if a contact tracing text is real.

if you receive scams by email., text, phone or mail (and I’m sure you do!) and you wish to report any to police, please contact Action Fraud.

Bishopstone has within the last week experienced two flytipping incidents on the road from Bridge Sollars crossroads to Mansel Lacy.  The rubbish has been dumped in a way that blocks part of the road, making it dangerous for traffic.  We’re not the only parish to suffer from flytipping recently, Credenhill is also experiencing the same thing. 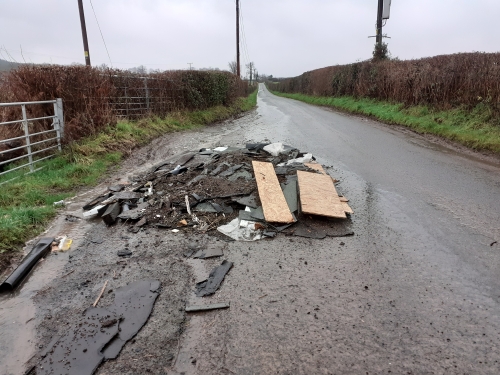 This photo is of the most recent incident from Saturday 30th January and as you can see the rubbish has been dumped in the layby as you come up from the crossroads and partly across the road.

Thankfully, Herefordshire County Council removes the rubbish very quickly but it would be good to catch the culprits.

In these two incidents, a flat-bed tipper is believed to be the vehicle used to dump building materials.

If you see anyone fly tipping in our parish, here’s what you can do:

Homes relying on electric heating may be eligible for free first-time central heating, grants are available for insulation and support for when your boiler needs repairing or replacing. Warm, affordable homes are vital to health and quality of life – and Keep Herefordshire Warm is here to help make the winter months more comfortable.

Call our friendly advisors for free on 0800 677 1432, or visit keepherefordshirewarm.co.uk.

If you’re a patient of the Weobley & Staunton doctors’ surgery,  then providing your mobile number will make it easier for the surgery to contact you when the next batch of vaccines are available.

The surgery find it time-consuming to contact patients to invite them for a vaccination – an individual member of staff can only phone up and book about 10-15 patients an hour. A speedy alternative is to send text messages and  include a link to the booking website.

The surgery is asking people to supply their mobile number and  also confirm their number by sending an e-mail to Weobley.Reception@nhs.net.

For more information about the Covid vaccination please see the Government website: 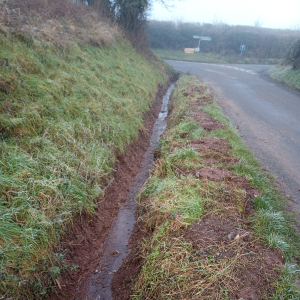 During 2020, the parish council secured a £7140 grant from Herefordshire Council under the Drainage Grant Scheme and this enabled us to carry out vital work to improve drainage across the parish.

This work involved the Parish Lengthsman, DC Gardening Services, hiring of a digger to dig out many ditches across the parish and running alongside roads in the 5 villages with reinstatement of grippers as required.

Then with the assistance of  Mayglothling Waste Ltd, storm drains were jetted ensuring water runs clear from ditch to ditch. Debris sucked out of inspection pits as required. The work uncovered several “lost” drains which have become hidden over the years and subsequently blocked up.

Full details of the work carried out across the parish and of any issues uncovered can be found in this report by DC Gardening Services.

If you notice any issues with the drains, please report them to the parish council via the form on the website.

This special update from Herefordshire Hub at West Mercia Police looks at how to avoid common scams – online, on the phone and at the door.

A police officer will never call you and ask you to go to your bank and withdraw money.
Fraudsters pretending to police officers are calling on the phone to get you to give them money.

Don’t. Hang up, wait 10 minutes and call 101 and report it. Banks, HMRC and police will never phone you and ask you to hand over cash and will never come to the house to collect it.

If someone comes to your door pretending to be a police officer remember that they always carry a warrant card. Ask them for it. Genuine callers will understand. Find out more… 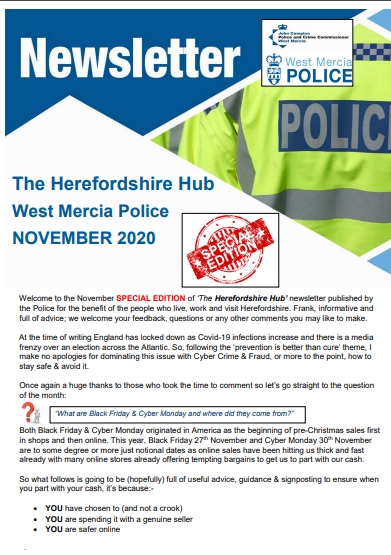 Supporting the Hereford Food Bank can really make a difference to providing relief from poverty in our county. The Covid-19 virus has made is especially hard for some families this year so the Christmas 2020 appeal will be providing a number of families with Christmas Hampers.

The Hereford Food Bank welcomes all gifts of food or donations of money. Currently it is short of tinned meat, rice (tinned and dry), tinned custard, tinned spaghetti, toothpaste (adult) and men’s toiletries (they currently have plenty of baked beans, pasta, tomatoes and soup).

There are donation points in nearly all the supermarkets in Hereford: Co-op, Waitrose, Sainsburys, Morrisons, Lidl, Asda and Tesco at Bewell St. and Belmont.

Ned Potter Ltd (Ned is a Byford resident) is sponsoring the food bank for the year ahead and is donating £25 per vehicle sold. Already, in October, Ned has donated £375.

For the Christmas Hampers, if you would like to help by donating any of the items shown below, it would be greatly appreciated. Or if you would prefer to make a donation towards the cost of a hamper, please visit the Hereford Food Bank facebook page and click on the blue Donate button.

Please bring any donations to us by  Monday 14th December. Thank you! 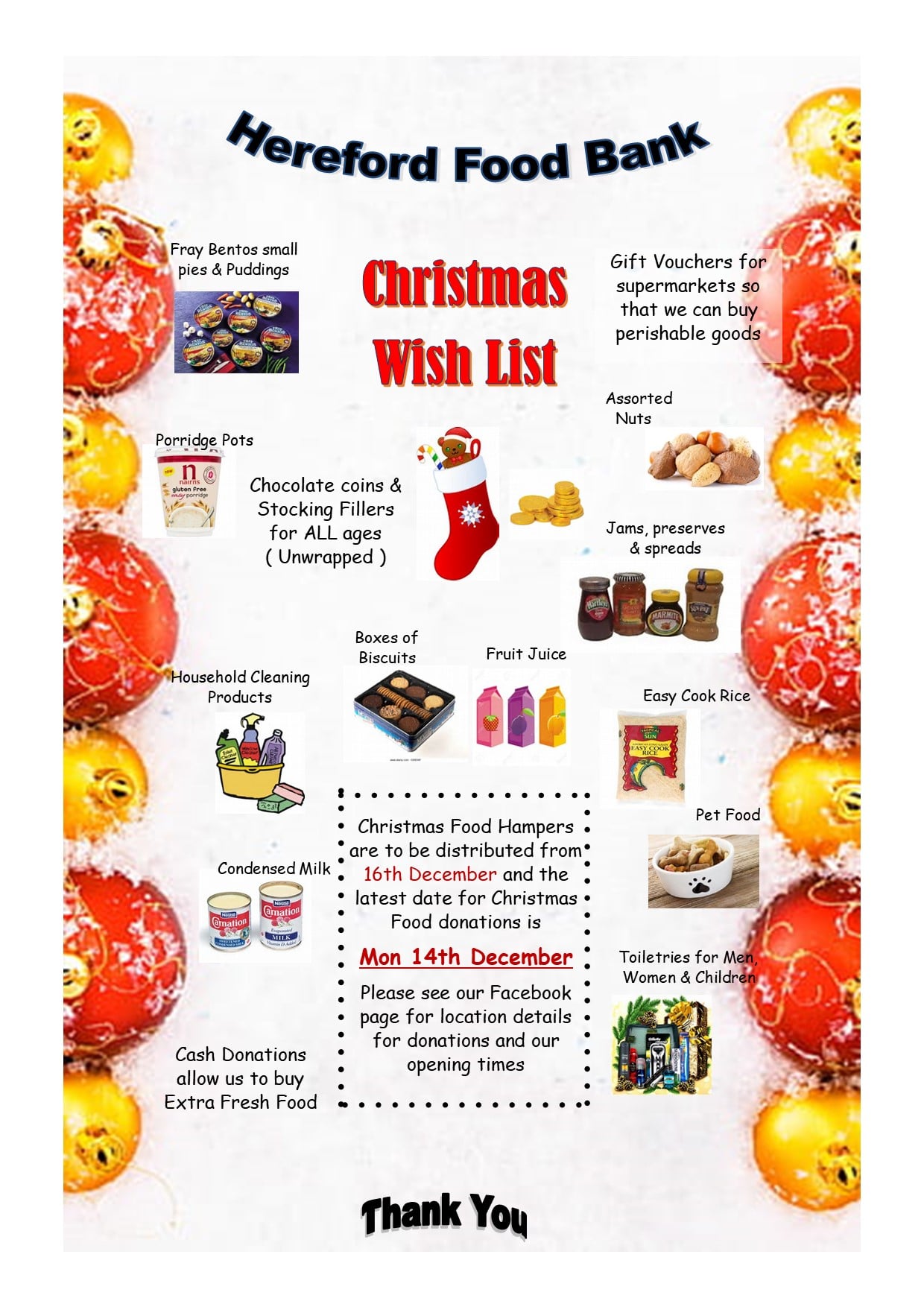 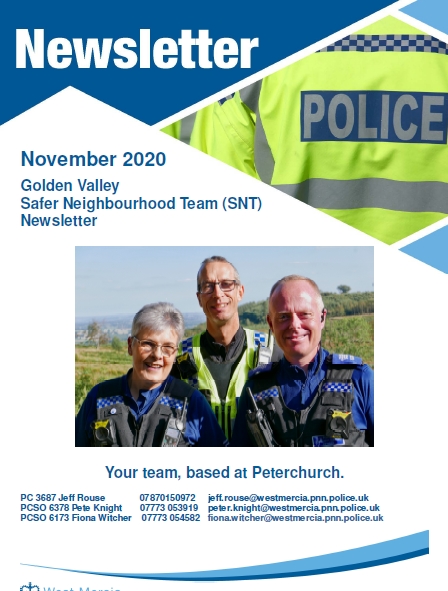 The Parish Council employ a Lengthsman to maintain local roads and footpaths, paid for by you from the Parish’s precept. Here is a quick look at the work carried out by the Lengthsman this year so you can see how your money is being spent: 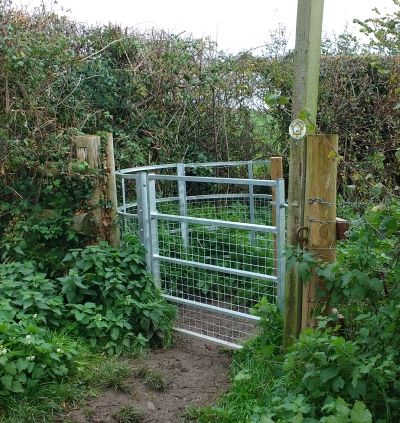 If you would like to report any issues with the U/C roads or footpaths in the parish, please contact the Parish Clerk through this Contact form.