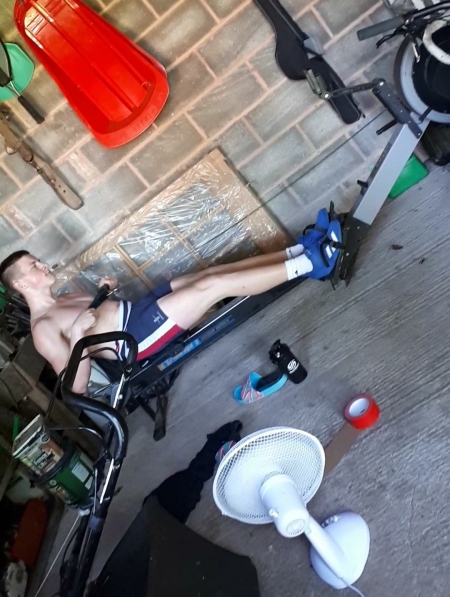 Some special Lockdown news from Byford that we would like to share. Jake Birch from Byford Common has just broken the British Record for the 15-16 age group for a marathon distance on a rowing machine by rowing 42,195 metres in 2hrs 48 minutes.

In order to get fit for his record attempt Jake has spent the lockdown in daily training on his rowing machine and in his self-built gym in the back garden – an example to us all!

This is just the most recent of Jake’s rowing achievements since he became the youngest winner for Hereford in a double scull when he was only 11. Coached by his very proud dad and mum, he has won three national medals and gained a world record for the distance rowed in an hour on a dynamic rowing machine.

Earlier this year he was selected for the junior GB rowing squad which has unfortunately been put on hold due to the pandemic. In September he will be taking up a scholarship place at Shiplake College, one of the top rowing schools in the country.

What have you been doing during Lockdown? Get in touch and we’ll share your story with others in our parish.

This is the first in a series of articles featuring what people have done during Lockdown as they’ve had more spare time on their hands than usual. 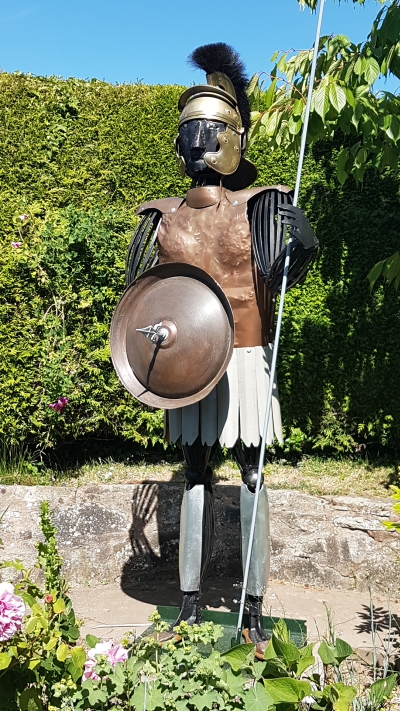 If you’ve driven through Bishopstone recently, you may have spotted a life-size model of a Roman Centurion standing by the entrance to Jolin, a house near the turn for Bishon Lane.  The work of John Macklin, this model has taken many painstaking hours to make. Here’s John’s story…

I was looking at my scrap metal pile in the yard and thought I must sort it out, when the end of an old copper water tank caught my eye. I thought it looks like a shield, I had a pair of old motor cycle forks which looked a bit like legs so the idea came to make a life sized Roman Centurion out of scrap metal. I had an old copper ball float from a cattle water drinking tank to make his head, and a load of thin metal strip recovered from when I cleared out an old industrial unit years ago.

So from these basic bits, I started to build the Centurion, welding up thin metal for his arms and legs, the knee caps were old ends of a curtain rail, the feet came from old cobbler’s trees, motorcycle forks for the hips and legs, from part of an old tow bar I made the hand, the armour was hammered out of the old copper cylinder, the skirt and leg shields were cut from an old road sign, ball bearings were used for the eyes, odd copper bits made the nose and ears.

The helmet was beyond my tin bashing skills, and I had run out of metal (my excuse). This came courtesy of eBay made by skilled tin bashers in India.

So why make a Roman Centurion? 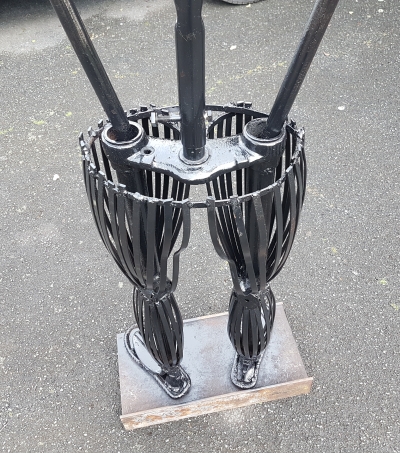 Having been born within 200m of the site of the Roman Town of Magnis, Kenchester and attending Kenchester School. I developed an interest in Roman History maybe because we played with Roman coins and other artefacts donated to the school uncovered by ploughing the town site over many years. We as school children were taken to look at the excavations made by archaeologists when they exposed the remains of the West Gate of the Town.

Living in Bishopstone on the side of an old marching road used by Centurions between AD43-410 on their way to the border forts of Clyro and Clifford, I thought the Statue would be a nice tribute to those men.

What have you been doing during Lockdown? Get in touch and we’ll share your story with others in our parish.

Here is a lost of local businesses providing and delivering food boxes.  Below this is a further list of suppliers of frozen and pre-prepared meals.

If you need any help with the following: 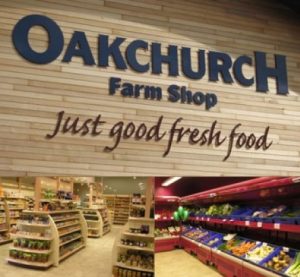 Oakchurch is offering a delivery service within a 5 mile radius of its shop, enabling anyone who is self-isolating to get fresh supplies delivered.  If you live beyond this 5 mile distance and are social distancing, you can still order – give your car reg and colour, and a member of staff will bring supplies out to the car so you don’t have to go in the shop.

For our parish, deliveries will be made on Fridays. Email enquiries@oakchurch.net with a list of basic items required (a shopping / price list hasn’t been created), your name, address and telephone number. Oakchurch will ring before delivery to take payment over the phone.

Here are the delivery days for other areas if you’d like to forward to friends and families living nearby.

Herefordshire County Council has sent every household in Herefordshire (88k) a letter focussed on the most vulnerable people and the support they will need outside their existing network, as part of its Talk Community Covid19 Response.

The areas of support  are:

Amy Pitt, Assistant Director for the Talk Community Programme, has been coordinating the development of a dedicated telephone line for vulnerable people and volunteers to contact us and we will then link them back into the community organisations. There have already been some fantastic community responses happening and the council can support the infrastructure through this response and provide community resilience.

Many of the wards and parishes have provided us with information of the community work being undertaken however there are some areas where we have little information. Please do forward to Amy and the TC team any community information to this email address talkcommunitycovidresponse@herefordshire.gov.uk.

The Archbishops of Canterbury and York have cancelled all public worship until further notice. This means that all regular services are cancelled.

However, most of our churches will remain open for private prayer and in some there are prayer leaflets available to take away. We have also set up a confidential telephone support system, operated by volunteers from the churches, for anyone in the parishes who needs someone to talk about any issues they are going through. Please ring Revd Rana Davies-James on 01432 760443 to access this. 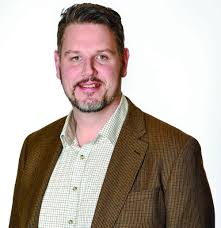 As you may know road safety is a high priority of mine and as the West Mercia Police and Crime Commissioner I am launching my draft Road Safety Strategy for consultation. This strategy has three key themes:

Whilst our roads are comparatively safer than others, too many people are still being killed and seriously injured in West Mercia. We must work together to see this number consistently reduce.

Your views are important to me and the feedback I receive will help inform the development of my finalised Road Safety Strategy. I see this as a real opportunity for the strategy to truly reflect the concerns and priorities of all of West Mercia’s communities.

The survey only takes a few minutes to complete so please help me to make West Mercia’s roads safer. A copy of the draft strategy is attached and the survey can be found through this link https://www.surveygizmo.eu/s3/90214147/Road-Safety-Strategy-Consultation

The consultation will close on Friday 20th March, information can be found at www.westmercia-pcc.gov.uk

At our Local History meeting on Thursday February 27th we will be celebrating an important part of Herefordshire’s farming history with a showing of “Stories from the Hopyards”.

Hops have been an integral part of our county’s life for centuries and this documentary uses archive film and photographs to capture the lives of the pickers, farmers, hauliers and brewers who were involved with this essential component of our national drink.

Whether you shared in those days yourself or simply enjoy a good pint you will find something to enjoy in this film.

We meet at the New Bridge Community Centre at 7.30pm, admission £3 to include coffee and biscuits. Visitors welcome

NEW BRIDGE TALK COMMUNITY HUB at the New Bridge Community Centre, Bridge Sollars will next be open on Wednesday 4th March 2020 from 10-30 – 12 noon. Drop in for a coffee and chat or visit the lending library. Volunteers can help you connect to groups, activities and support in the local community to help you stay independent, happy and healthy.

Here is information about local organisations that are co-ordinating help to those badly affected by flooding in Herefordshire.

Salvation Army
The Salvation Army (Canonmoor St, Hereford – near Courtyard – 01432 264543) will take warm clothing, bedding, shoes, food & small household items etc and will liaise with other charities on the ground.

Herefordshire Council
A grant and other support is available for those homes and businesses affected by the latest floods. Wider support is through this link Recovery under way in parts of Herefordshire as response continues and this link takes you straight to the application.